SEAN: I enjoyed your piece and have been telling everyone its subtitle should be: “See the ghosts of America before they see you”. I gleefully spoke with Brendan afterwards about Eugene Chadbourne in terms of music and stagecraft (him I’ve seen with electrified rake and birdcage). As a musician, I have always felt it awkward that many dancers take music instead of making it or collaborating. Appalachian Spring Break‘s score was as deconstructive, improvisatory and full as its movement. Your mic’d furniture, shrill clarinets and whip-like microphone fragilely palpitated the original’s familiar open 5ths, while your dancing and insistence on expression were great in balancing the noise’s alienating affects.

The next morning I woke up and the Bunuel reference hit me, I hadn’t watched that film (Un Chien Andalou) in a zillion years and laughed about your semblance to the protagonist and the mash-up possibilities with Appalachian Spring Break and Appalachian Spring’s TV production. In sum, I really dug your overblown undertow.

SCOTTY: Funny how references work — I just had the idea of pulling the piano in rehearsal one day to get the feeling of a silent movie and then Brendan almost immediately said that’s a Bunuel reference — and of course we Youtubed it and there it was.

SEAN: What I really like, to go back to the ghosts of America, is your dynamic embodiment as an actor and dancer of the vulnerable, serious, fearless and ridiculous. Ultimately you go out on a limb or bouffant and twist the everyday into a realer surrealism. I had a meta-narrative going about the South and our PTSD Police State, and thought the black ghost/white ghost was a genius and paradoxically humanizing symbol of Love/Rage/Confusion. Beyond its dissonant celebration of this moment in political history, in what ways is Appalachian Spring Break a femmage to Martha? I enjoyed the decadent puritanical implications of the “give me a cigarette” line and am wondering if you wrote it or are quoting her.

SCOTTY: Oh femmage. It took me a while to get that! The flesh colored spandex tube costume is a half-assed homage to Martha’s Lamentations, though I had already made the costume before realizing the obviousness of that reference. About that line: like most of the things in my pieces it just occurs to me that something like that ought to be there. I don’t spend much time coming up with the idea, thinking about the idea as a solution to anything, or judging the idea. I scribble it down and try it out. More often than not it ends up in the piece. I remember thinking there ought to be some text right about there, and that line just burbled up: “Ralph, I’m broke. Bring me another cigarette.” It’s kind of the hinge between the most literal references to Martha’s choreography and what follows, which is a dancy section without choreography which makes me confused and leads to manic mime and then silent movie acting. I wanted something more dramatic than Martha’s dramatic choreography and bad acting seemed to fill the bill. The second night on stage my brain froze and I could not remember the name “Ralph”. After picking my brain in terror I decided I better just make up a new name, which was “Chad”, so the next night the line became “Ralph, I’m broke. Bring me another cigarette. Ralph! Chad? Ralph! Chad!!”

Choreographically (and musically), the most literal references to Appalachian Spring occur in the section where Brendan is playing all the clarinet parts from the orchestral score. My choreography there is based on the entrances of the principal characters, which I studied on the black and white film of Appalachian Spring on Youtube. I enjoyed the pompous, flat-footed walk of all the entrances. After incorporating these entrances I realized that all the characters begin the dance with a very specific relationship to a part of Noguchi’s set: The preacher ascends a little slanted round platform; The young man enters and touches a wall, then leans over to rest on a hitching post; Martha, after hugging the young man flounces about a post. My bad/exaggerated miming of these set interactions is what interests me most now about this material.

SEAN: In my imaginary, you have compressed every one of her facial expressions throughout her career into one hour through a Jacques le Coq blender.

SCOTTY: I like that idea. I knew nothing of le Coq until Googling him just now. I have never studied nor watched much mime, but I always come back to attempting it in my dancing. I revel in its status as the most derided and easily parodied form of theater, the ease of doing it badly for camp’s sake, the way it is such an elemental form of pretending and make-believe. I have always been attracted to the grotesque in my dancing and that tendency certainly plays out in the use of my face. I use it like an instrument, both consciously and unconsciously. It boggles me that large swaths of dancers in ballet and modern dance cling to the frozen half smile, the neutral Botox face, the earnest fixed stare above some imaginary horizon line above the heads of the audience. 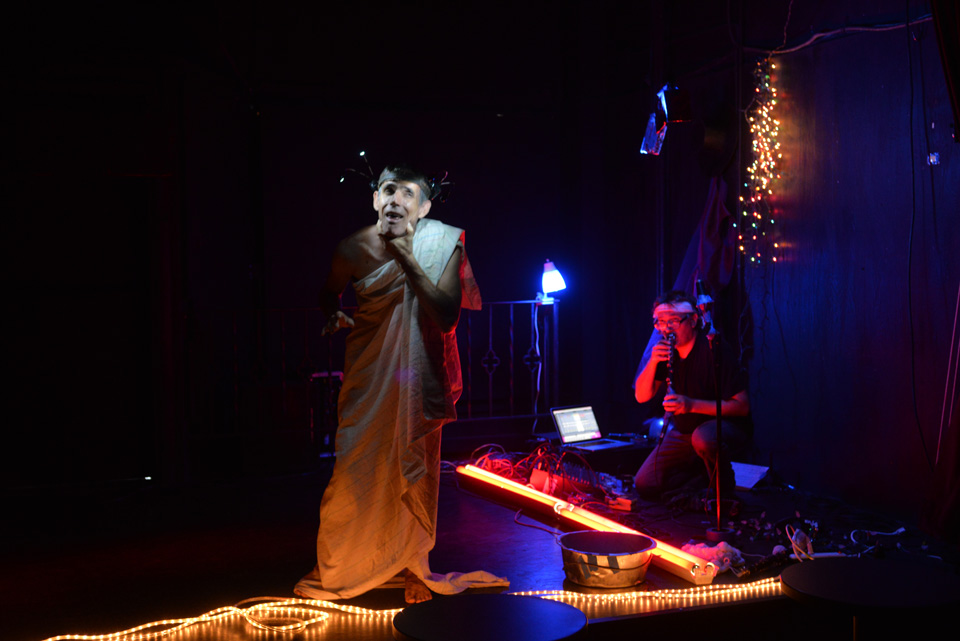 SEAN: Your thoughtful confessional answers a lot! But, was I right about the ghosts? Due to the way I did/didn’t see it (only while photographing) I am dwelling again on visuals. As your title suggests Harmony Korine’s Spring Breakers, I am adding an image from his book Crack Up at the Race Riots. He furthers the relationship between performing and viewing as one of ballet and wrestling (via Paradise Alley) – a tortured love story’s broken grace of identity/politics and reconciliation, perhaps like your tribute to Aaron and Martha and other ghosts. Photographed against the sky, the text makes me think of spring and of words as puritanical architecture to be escaped into relevant action. Perhaps we have said enough?

Sean Smuda is a visual and performative person; this work hangs out: here.